American rapper who gained popularity through his debut mixtape A Love Letter to You and its lead single “Love Scars”. His singles “Dark Knight Dummo” and “Topanga”, both reached the Billboard Hot 100. Trippie Redd’s debut studio album Life’s a Trip and second studio album ! both reached the top five of the Billboard 200. His fourth mixtape A Love Letter to You 4 topped the chart. He has collaborated with such artists as Lil Keed, Travis Scott and Xxxtentacion. Born Michael Lamar White IV on June 18, 1999 in Canton, Ohio, to parents Tonya White and Michael Lamar White III, his older brother, Dirty Redd, was killed in a car accident in 2014. He also has a younger brother nicknamed “Hippie Redd”. He is of Irish, Native American and African American descent. He attended McKinley Senior High School. After graduating from McKinley Senior High School, Redd moved to Atlanta, where he met rapper Lil Wop and was eventually offered a deal with a record label. He has dated Mulan Vuitton, Aylek$ and rapper Coi Leray. 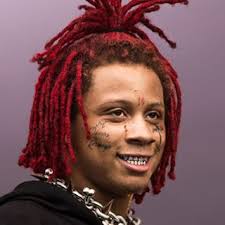 Trippie Redd Facts:
*He was born on June 18, 1999 in Canton, Ohio, USA.
*His parents are Tonya White and Michael Lamar White III.
*His father was in prison at the time of his birth.
*He was inspired to play music by his older brother who died in a car crash in 2014.
*He released his debut EP titled Awakening My InnerBeast on August 27, 2016.
*His debut album Life’s a Trip, peaked at number four on the Billboard 200 Album Chart selling 72,000 album-equivalent units.
*Long-time friends with Lil Wop 17.
*Visit his official website: www.trippieredd.com
*Follow him on Twitter, SoundCloud, YouTube, Facebook and Instagram.