Natalie Cole was an American singer, songwriter and actress, best remembered by the public for her hits like “This Will Be,” “Sophisticated Lady” and her Grammy Award-winning album “Inseparable.” She sold more than 30 million records worldwide over the course of her career. Born Natalie Maria Cole on November 6, 1974 in Los Angeles, California, to singers Nat King Cole and Maria Cole, she grew up in the affluent Hancock Park district of Los Angeles. At the age of 6, she sang on her father’s Christmas album, and began performing at age 11. She graduated from University of Massachusetts (1972), where she majored in Child Psychology and minored in German. She was married three times and had a son, Robert with her former husband, Marvin Yancy. She died of Heart failure in 2015 at age 65. 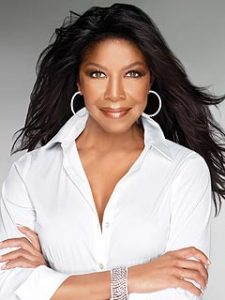 Natalie Cole Facts:
*The daughter of Nat ‘King’ Cole and Maria Cole.
*She won a Grammy Award in the “Best New Artist” category in 1975.
*She was ranked #92 on VH1’s 100 Greatest Women of Rock N Roll.
*She was influenced by Ella Fitzgerald, Frank Sinatra, Aretha Franklin, Sarah Vaughan, The Beatles and The Rolling Stones.
*Visit her official website: www.nataliecole.com