Natalie Portman is an Israeli-American actress who won the Academy, BAFTA and Golden Globe Awards for “Best Actress” for her role as Nina Sayers in the 2010 thriller Black Swan. She has also starred in such films as Jackie, Thor, Closer, Annihilation, No Strings Attached, Garden State, V for Vendetta, and the Star Wars prequel trilogy. In 2006, Portman hosted an episode of the television sketch comedy show Saturday Night Live. Born Natalie Hershlag on June 9, 1981 in Jerusalem, Israel, she is the only child of Avner Hershlag and Shelley Stevens. She graduated in 1999 from Syosset High School and earned a degree in psychology from Harvard University. She is married to dancer Benjamin Millepied, with whom she has two children. 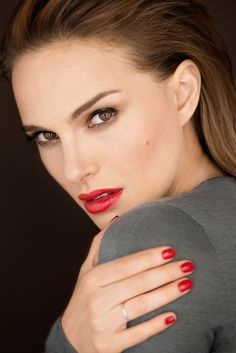 Natalie Portman Facts:
*She was born in Jerusalem, Israel and moved to the United States when she was three years old.
*Her parents are both of Ashkenazi Jewish descent.
*She is an only child.
*She was named after Natalie Wood.
*She was discovered by an agent in a pizza parlor.
*She began modeling at age 11.
*She is trained in jazz, ballet, and tap dancing.
*She made her film debut in Luc Besson’s action thriller Léon: The Professional (1994).
*One of People magazine’s 50 Most Beautiful People in the World (2002).
*In 2003, she graduated from Harvard University with a degree in psychology.
*She is the recipient of various accolades including; an Academy Award, two Golden Globe Awards, a BAFTA Award, and a SAG Award.
*She is fluent in English, Hebrew and a bit of French, German, Japanese and Spanish Arabic.
*Ben Kingsley is her favorite actor.
*She is close friends with Mila Kunis, Jake Gyllenhaal and Bryce Dallas Howard.
*Visit her official website: www.natalieportman.com
*Follow her on Twitter, Facebook and Instagram.