Natassia Malthe is a Norwegian model and actress, best known for her roles in BloodRayne 2: Deliverance, BloodRayne: The Third Reich, and In the Name of the King 2: Two Worlds. Her other notable roles include Devil’s Highway, Skinwalkers, DOA: Dead or Alive, The Other Side of the Tracks, Vikingdom, and The Good, the Bad, and the Dead. In 2009, Malthe starred as an elf bounty-hunter and sorceress-in-training in the Sci Fi Channel miniseries Knights of Bloodsteel. 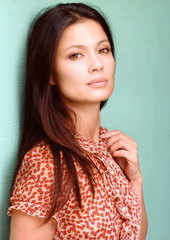 Natassia Malthe Facts:
*Born on January 19, 1974 in Oslo, Norway, she is of Malaysian and Norwegian descent.
*Her mother is from Kota Kinabalu, Sabah.
*Growing up, she trained at ballet schools in Norway, Scotland, and Canada, and went on to seek musical theatre training in England.
*She was named #74 on the Maxim magazine “Hot 100 of 2005” list.
*Follow her on Instagram.