Naya Rivera is an American actress and singer. She is best known for playing the role of Santana Lopez on the Fox television series Glee (2009–2015), for which she won a Screen Actors Guild Award in 2010. She was signed to Columbia Records as a solo artist in 2011 and released her debut single “Sorry” on September 17, 2013, featuring rapper Big Sean. She was also in the music video of the B2K’s song “Why I Love You.” She played Felipa Jonas in the 2017 comedy film Mad Families. Born Naya Marie Rivera on January 12, 1987 in Santa Clarita, California, USA, to Yolanda and George Rivera, she belongs to Puerto Rican, African American, and German descent. She has two younger siblings, a sister named Nickayla, and a brother, Mychal. At age four, she had her first acting role on the TV series The Royal Family and made her film debut in 2009’s Frankenhood. She married Ryan Dorsey in 2014, and the couple had a son named Josey Hollis Dorsey in 2015 before getting divorced in 2018. 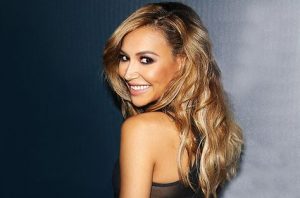 Naya Rivera Facts:
*She was born on January 12, 1987 in Santa Clarita, California, United States.
*She started her career as a child actress and model, appearing in national television commercials.
*She is left-handed.
*She is an avid reader and dedicates time to various charitable organizations.
*She ranked #61 in 2010, #43 in 2011 and #27 in 2012 in Maxim’s Hot 100 list.
*In 2011, she was named number one on AfterEllen’s Hot 100 list.
*She has six tattoos.
*She was once engaged to rapper Big Sean.
*In November 2017, she was arrested and charged in Kanawha County, West Virginia with domestic battery against her future ex-husband Dorsey after she allegedly hit him in the head and face.
*Visit her official website: www.nayarivera.com
*Follow her on Twitter, YouTube, Facebook and Instagram.