Indian javelin thrower who has collected six gold medals in major tournaments across the world, and is the first track and field athlete to win a gold medal for India at the Olympics and one of the only two Indians to win a gold medal in any individual games at the Olympics. Chopra set the world under-20 record of 86.48 m in the 2016 IAAF World U20 Championships. He scored a gold-medal winning throw (88.06m) at the 2018 Asian Games and 2018 Commonwealth Games. On August 7, 2021, Chopra won a gold medal in 2020 Summer Olympics with the 87.58 m throw, which is the first Olympic medal in athletics won by an Indian. 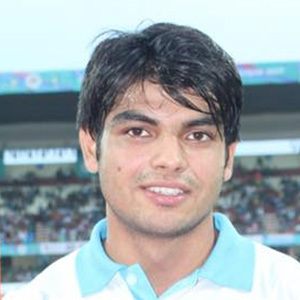 Neeraj Chopra Facts:
*He was born on December 24, 1997 in Panipat, India.
*He began training for javelin throw in 2011 during his teenage at the Shivaji Stadium.
*He graduated with his bachelor’s degree from DAV College, Chandigarh.
*He has served as a junior commissioned officer in the Indian Army with the rank of Naib Subedar. (2016)
*He is the first Indian athlete to ever win a World title in Track and Field at U-20.
*He won a gold medal at the 2017 Asian Championships.
*He won the 2018 Commonwealth Games and Asian Games.
*He won a gold medal at the 2020 Summer Olympics, with the 87.58 m throw, which is the first Olympic medal in athletics won by an Indian.
*He enjoys travelling on a motorcycle, and he owns a Harley Davidson motorcycle.