Nick Kyrgios is an Australian professional tennis player who achieved his career’s best ranking on 24 October 2016, which was #13. Turning professional in 2013 at age 18, he reached the quarterfinals of the 2014 Wimbledon Championships upsetting Rafael Nadal and Richard Gasquet. He won the boys’ singles event at the 2013 Australian Open and the boys’ doubles event at the 2013 Wimbledon Championships. Born Nicholas Hilmy Kyrgios on April 27, 1995 in Canberra, Australia, to Norlaila and Giorgos Kyrgios, his mother is a computer engineer, and his father is a self-employed house painter. He belongs to Greek and Malaysian descent. He attended Daramalan College and won his first ITF title at fifteen years old. He is in a relationship with Croatian-Australian tennis player Ajla Tomljanović. 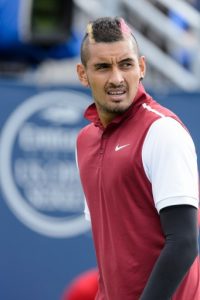 Nick Kyrgios Facts:
*He turned professional in 2013.
*He won ITF junior tournament At the age of 15.
*Currently, he is the highest ranked Australian in the ATP rankings.
*His idols were Jo-Wilfried Tsonga, Michael Jordan, LeBron James and Roger Federer as a child.
*He is a huge fan of Boston Celtics (NBA League Team) and Tottenham Hotspur (Premier League Team).
*Visit his official website: www.nickkyrgios.org
*Follow him on Twitter, Facebook and Instagram.