Nicki Minaj is a Trinidadian-born American rapper and singer who first gained attention after releasing the mixtapes Playtime Is Over, Sucka Free, and Beam Me Up Scotty. On November 9, 2010, Minaj released her first studio album, Pink Friday, which climbed to number one on the US Billboard 200, and was ultimately certified triple platinum by the Recording Industry Association of America (RIAA). This album included the singles “Your Love”, “Moment 4 Life” (featuring Canadian rapper Drake), “Super Bass”, “Did It on ‘Em”, and “Fly” (featuring Barbadian singer Rihanna). Her second album, Pink Friday: Roman Reloaded, was released in 2012 and debuted at No. 1 in several countries. Her third studio album, The Pinkprint, was released in December 2014. This album contained songs such as “Anaconda,” “Pills N Potions,” “Only,” and “Bed of Lies.” Minaj made her film debut in the 2012 animated film Ice Age: Continental Drift and played a supporting role in the romantic comedy The Other Woman in 2014. In 2013, she became a judge on the twelfth season of American Idol. 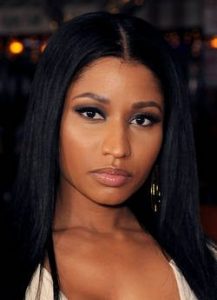 Nicki Minaj Facts:
*She was born on December 8, 1982 in Saint James, Port of Spain, Trinidad and Tobago.
*She is of Afro-Trinidadian and Indo-Trinidadian descent.
*She graduated from LaGuardia High School.
*She played the clarinet in middle school, and worked as a waitress at Red Lobster.
*She signed with Young Money Entertainment in 2009.
*Minaj released her debut album, Pink Friday, in 2010, followed by her second album, Pink Friday: Roman Reloaded in 2012.
*She became the first and only female rapper to be listed on Forbes’ Hip Hop Cash Kings list.
*She is friends with Ariana Grande, Foxy Brown, Keke Wyatt, and Kate Upton.
*In 2019, she married Kenneth Petty.
*She was previously in a relationship with Safaree Samuels, Meek Mill, Nas and Future.
*Visit her official website: www.mypinkfriday.com
*Follow her on Twitter, YouTube, Facebook and Instagram.