Olivia Munn is an American actress, model and television personality. She is known for her roles in television, such as The Newsroom, Perfect Couples, Beyond the Break, and Six, and in the films X-Men: Apocalypse, Deliver Us from Evil, Mortdecai and Magic Mike. She also had the leading role in The Babymakers (2012). She has also done voice work in Robot Chicken (2011), Miles from Tomorrowland (2015), and The Lego Ninjago Movie (2017). As a model, she has appeared in campaigns for Nike, Pepsi, Neutrogena and Hewlett Packard. She has also appeared on several magazine covers. Born Lisa Olivia Munn on July 3, 1980 in Oklahoma City, Oklahoma, USA, to Kimberly Schmid and Winston Barrett Munn, her parents divorced when she was two years old, and her mother remarried to a member of the United States Air Force. She spent much of her growing years in Tokyo, Japan. She is of English, Irish and German descent on her father’s side, and of Chinese descent on her mother’s side. She attended and graduated from Putnam North City High School in Oklahoma City, Oklahoma. She majored in journalism and minored in Japanese and dramatic arts from University of Oklahoma. From 2014 to 2017, she was in a relationship with NFL quarterback Aaron Rodgers. 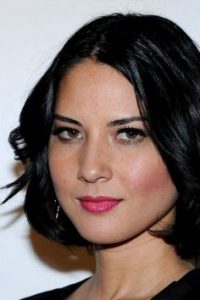