Oprah Winfrey is an American media proprietor, talk show host, actress, producer, and philanthropist. She is best known for hosting her own multi-award-winning talk show, The Oprah Winfrey Show, the highest-rated syndicated program on air, from 1986 to 2011. She has also appeared in several movies including The Butler, The Color Purple and A Wrinkle in Time. She became the world’s first multi-billionaire black person and the richest African-American. TIME magazine named her the most influential woman in the world. Born Orpah Gail Winfrey on January 29, 1954 in Kosciusko, Mississippi, USA to Vernita Lee and Vernon Winfrey, she was raised by her single, teenaged mother in the city of Milwaukee. She was raped at age nine by her nineteen year old cousin, who was baby sitting her. When she was fourteen, she became pregnant with an ill son who died shortly after birth. After graduating from East Nashville High School in Nashville, Tennessee (1971), she attended and graduated from Tennessee State University, with a degree in Speech and Performing Arts. She was crowned Miss Black Tennessee while in college. She began working in radio and television broadcasting in Nashville when she was nineteen. Since 1986, she has been in a long term relationship with Stedman Graham. 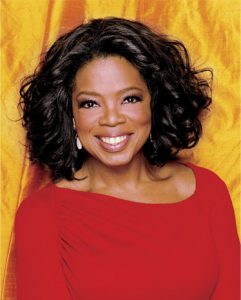 Oprah Winfrey Facts:
*She was named “Orpah” after a biblical character. People made the mistake of calling her “Oprah”. She decided to keep this name.
*She was raped at age nine by her nineteen year old cousin, who was baby sitting her.
*She was named the most influential woman in the world by TIME magazine.
*One of People magazine’s 50 Most Beautiful People in the World (1997).
*She became the first black female billionaire in the United States in 2003.
*Forbes magazine ranked her #1 for two consecutive years in 2007 and 2008 in the list of 100 Most Powerful Celebrities.
*She had a net worth over $2 billion in 2013.
*She is left-handed.
*She endorsed Barack Obama in 2006 for the 2008 election.
*She is good friends with Tyler Perry, and best friends with Gayle King and Quincy Jones.
*She is friends with T.D. Jakes, Mike Wallace, Rachael Ray, David Oyelowo, Joan Rivers, Regis Philbin, Roger Ebert, Bill Cosby, Will Smith, Ellen DeGeneres, ‘Ava DuVernay’, and ‘Kerry Washington (I)’.
*She has five dogs: Sunny and Lauren (springer spaniels), Sadie (cocker spaniel) and Luke and Layla (golden retrievers).
*Visit her official website: www.oprah.com
*Follow her on Twitter, Facebook and Instagram.