Roger Federer is a Swiss professional tennis player who is widely considered to be one of the greatest tennis players of all time. Turning professional in 1998, he has won a record 20 Grand Slam singles titles, including 8 Wimbledon titles. He holds the record for the most number of weeks at the top spot in the world ranking, with 308 weeks. He also holds the record for most weeks at the top spot in a row, with 237 weeks from 2004 to 2008. He won a gold medal at the 2008 Summer Olympics and a silver medal at the 2012 Summer Olympics. Born on August 8, 1981 in Basel, Switzerland to South African mother Lynette Du Rand and Swiss father Robert Federer, he has one older sister named Diana. He was raised in nearby Birsfelden, Riehen, and then Münchenstein. He is married to Mirka Federer, a Slovak-born Swiss former professional tennis player, with whom he has four children: twin daughters, Charlene and Myla and twin sons, Lenny and Leo. 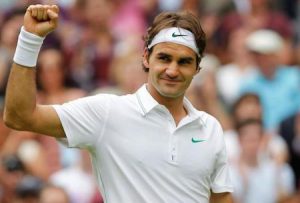 Roger Federer Education:
He dropped out of school at the age of 16.

Roger Federer Facts:
*He was raised Roman Catholic.
*While growing up, his idols were Boris Becker and Stefan Edberg.
*He was among his country’s top junior tennis players by age 11.
*He is the only player to win Wimbledon and U.S open for three straight years.
*In 2003, he became the first Swiss tennis player to win a Grand Slam.
*He is fluent in English, Swiss German, German, French and a bit of Swedish and Italian.
*While growing up, he played badminton and basketball.
*He knows how to play the piano.
*He plays squash and table tennis.
*He is a supporter of FC Basel and A.S. Roma.
*Up until the age of 16, Roger was a vegetarian, he first ate meat at a steakhouse with some tennis teammates.
*He owns luxurious homes and villas in Dubai, the Swiss village of Valbella, Wollerau and the south of Zurich.
*He launched his own fragrance called “RF-RogerFederer” in July 2003.
*In September 2022, he announced his retirement from high-level tennis following the Laver Cup later that month.
*Visit his official website: www.rogerfederer.com
*Follow him on Twitter, Google+, YouTube, Facebook and Instagram.