Orlando Bloom is an English actor. He is best known for his portrayal of Legolas in The Lord of the Rings film franchise, and as Will Turner in the Pirates of the Caribbean film trilogy. He has also starred in such films as Romans, Troy, Unlocked, Kingdom of Heaven, The Shanghai Job, and New York, I Love You. In 2019, Bloom began starring in the Amazon Prime TV show Carnival Row. Born Orlando Jonathan Blanchard Copeland Bloom on January 13, 1977 in Canterbury, Kent, England, to parents Sonia Constance Josephine and Colin Stone, he has an older sister named Samantha. He married Victoria’s Secret model Miranda Kerr in 2010, and the couple had a son named Flynn Christopher in 2011 before getting divorced in 2013. In 2016, Bloom began a relationship with pop star Katy Perry, and the couple got engaged on February 14, 2019. They are expecting their first child together, a girl. 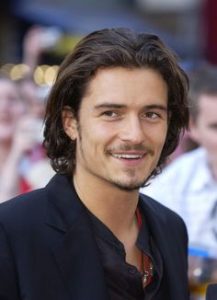 Orlando Bloom Facts:
*He was born on January 13, 1977 in Canterbury, Kent, England, UK.
*He was named as one of Teen People magazine’s “25 Hottest Stars Under 25” in 2002.
*People Magazine named him one of the top 50 Most Beautiful People in the World in 2004.
*He was selected as one of People magazine’s “Hottest Bachelors” in 2004.
*He was named a UNICEF Goodwill Ambassador in 2009.
*He speak French fluently.
*He is friends with David Blaine, Courteney Cox and Eric Bana.
*He quit smoking in 2002.
*He is good friends with Liv Tyler, Kirsten Dunst, Jennifer Aniston and Johnny Depp.
*He is a supporter of English Fooltball Club, Manchester United.
*He has two tattoos and his left ear pierced.
*Follow him on Facebook and Instagram.