Patricia Arquette is an American actress born in Chicago, Illinois. She has played prominent roles in a number of films, including Tony Scott’s True Romance, Tim Burton’s Ed Wood, David O. Russell’s Flirting with Disaster, David Lynch’s Lost Highway, Stephen Frears’s The Hi-Lo Country, Martin Scorsese’s Bringing Out the Dead, and Andrew Davis’s Holes. For her role in the 2014 film Boyhood, she won an Academy Award and a Golden Globe Award for Best Supporting Actress. Born Patricia T. Arquette on April 8, 1968 in Chicago, Illinois, to Brenda Denaut and Lewis Arquette, she belongs to Jewish, French-Canadian, Swiss-German, and English descent. At the age of eighteen, she made her film debut in A Nightmare on Elm Street 3: Dream Warriors. She was married to Nicolas Cage from 1995 to 2001 and Thomas Jane from 2006 to 2011. She has two children. 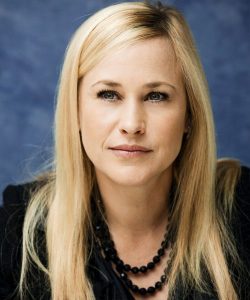 Patricia Arquette Facts:
*She was born on April 8, 1968, in Chicago, Illinois.
*She played schoolteacher-turned-outlaw Kissin’ Kate Barlow in the Disney film Holes in 2003.
*She won the ‘Academy Award’ in the category of ‘Best Performance by an Actress in a Supporting Role’ for her performance in the 2014 film Boyhood in 2015.
*Follow her on Twitter, Facebook and Instagram.