Paul McCartney is a British singer, songwriter, multi-instrumentalist, and composer. He rose to international fame as a member of the band The Beatles, along with George Harrison, John Lennon, and Ringo Starr. He wrote hit songs for the Beatles such as “Eleanor Rigby,” “Blackbird” and “Penny Lane.” The Beatles earned an Academy Award for Best Music, Original Song Score for their 1970 Let It Be documentary. Born as James Paul McCartney in Liverpool, Merseyside, England, on June 18, 1942, to James McCartney and Mary Patricia, he belongs to Irish and English descent. He was married to American musician, photographer, and animal rights activist Linda McCartney, until her death. Among their children is fashion designer Stella McCartney. 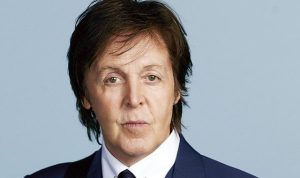 Paul McCartney Facts:
*His father was a musician, and had a band named Jim Mac’s Jazz Band.
*He was a member of the band The Beatles, along with John Lennon, George Harrison, and Ringo Starr.
*As a solo artist, he was inducted into the Rock and Roll Hall of Fame in 1999.
*He has earned 21 Grammy Awards across his career.
*In 1982, he sang a duet with Stevie Wonder on the #1 hit “Ebony & Ivory”.
*He was named one of E!’s “top 20 entertainers of 2001.”
*He is an animal-rights activist, vegetarian and anti-landmine activist.
*Visit his official website: www.paulmccartney.com
*Follow him on Twitter, YouTube, Google+, Facebook and Instagram.