Paul Reubens is an American actor, comedian, writer, film producer, and game show host. He is best known for his portrayal of Pee-wee Herman on the children’s television show Pee-wee’s Playhouse, and in the 1985 film Pee-wee’s Big Adventure. Reubens’s other notable works include Back to the Beach, Mystery Men, The Blacklist, Murphy Brown, Gotham, You Don’t Know Jack (game show), Matilda and Blow. He has also done voice work in Legends of Tomorrow, Mosaic, Voltron: Legendary Defender, The Nightmare Before Christmas, Flight of the Navigator, Dr. Dolittle, Teacher’s Pet, The Smurfs, Tripping the Rift, Penn Zero: Part-Time Hero, Pickle and Peanut, American Dad!, Sanjay and Craig, Tron: Uprising, Robot Chicken, Chowder, and Batman: The Brave and the Bold. Born Paul Rubenfeld on August 27, 1952 in Peekskill, New York, to parens Judy and Milton Rubenfeld, he was raised in Sarasota, Florida. He has two younger siblings, a sister named Abby, and a brother, Luke. He began his career as an improvisational comedian and stage actor joining the Los Angeles troupe The Groundlings in the 1970s. He made his film debut with a cameo role in the 1980 comedy film Pray TV. 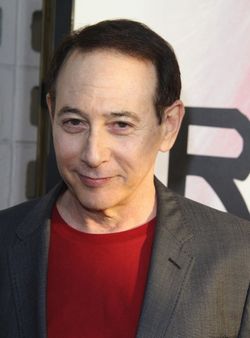 Paul Reubens Facts:
*He was born on August 27, 1952 in Peekskill, New York, USA.
*His father, Milton, fought as a pilot during World War II, first for Britain’s Royal Air Force and then for the United States Air Force.
*He studied drama at the California Institute of the Arts.
*He was a contestant on TV’s The Gong Show (1976).
*He was one of the member of the comedy troupe The Groundlings.
*Famous for creating and playing the character Pee-wee Herman in several TV shows and films.
*In 1988, he received a Star on the Hollywood Walk of Fame at 6562 Hollywood Boulevard in Hollywood, California.
*He was arrested for masturbating in an adult movie theatre in 1991.
*He is friends with Robin Williams.
*Visit his official website: www.peewee.com