Paul Rudd is an American actor of film, television, and stage. He is best known for his roles in the films Anchorman, Clueless, The 40-Year-Old Virgin, This Is 40, I Love You Man, Ant-Man and Admission. He is also known for television roles as Kirby Quimby Philby on Sisters, Mike Hannigan on Friends, and Andy Wet Hot American Summer: First Day of Camp. Born Paul Stephen Rudd on April 6, 1969 in Passaic, New Jersey, USA to British parents, Gloria and Michael Rudd, his family moved to Overland Park, Kansas, when he was ten. He belongs to Jewish descent and has one younger sister named Julie. He studied theatre at the University of Kansas and the British American Drama Academy. He worked as a DJ at Bar Mitzvahs before his career became successful. He has been married to Julie Yaeger since February 23, 2003. They have two children. 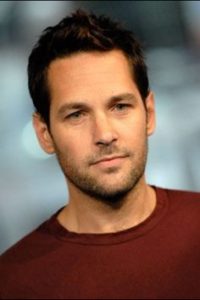 Paul Rudd Facts:
*His mother worked as a sales manager and his father worked as a historical tour guide.
*He received a star on the Hollywood Walk of Fame in July 2015.
*He is an big fan of the Kansas City Royals.
*He is close friends with Rob Thomas and Jon Hamm.
*Visit his official website: www.paulrudd.co.uk
*Follow him on Twitter, Facebook and Instagram.