Paulina Singer is an American actress of film and television. She is best known for her roles as Grace Bledsoe in the WE tv’s horror drama series South of Hell and Jessie Tyler on Freeform’s teen drama series Dead of Summer. In 2017, Paulina played Kelley Winters in the romantic thriller television film High School Lover, alongside James Franco, François Arnaud, Lana Condor and Julia Jones, which premiered on Lifetime on February 4, 2017. Born on September 5, 1991 in Exeter, New Hampshire, USA, she is of African American descent on her father’s side, and of Ukrainian descent on her mother’s side. Paulina attended Eugene Lang College The New School for Liberal Arts in New York City for a year before leaving to pursue her acting career. She has been in a relationship with Elijah Craig II, a talented photographer and designer. 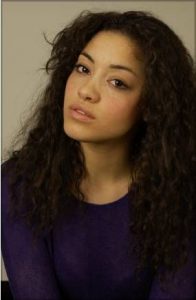 Paulina Singer Facts:
*She was born on September 5, 1991 in Exeter, New Hampshire, United States.
*She belongs to both African American and Ukrainian descent.
*She studied for a year at Eugene Lang College The New School for Liberal Arts in New York City.
*Visit her official website: www.paulinasinger.com
*Follow her on Instagram.