Peaches Geldof was a British journalist, television presenter and model. She worked as a writer for the UK edition of Elle Girl magazine, The Daily Telegraph, and The Guardian. In the later part of her life, Geldof worked primarily in modelling and television. Born Peaches Honeyblossom Geldof on March 13, 1989 in Westminster, London, England, she was the second daughter of musician Bob Geldof and television presenter Paula Yates. She had two sisters, Fifi Trixibelle Geldof, Little Pixie Geldof and one half-sister, Heavenly Hiraani Tiger Lily Hutchence. She attended Queen’s College in London. She was married to Thomas Cohen and Maxwell Drummey. She died of Heroin overdose in Wrotham, England on April 7, 2014, at age 25. 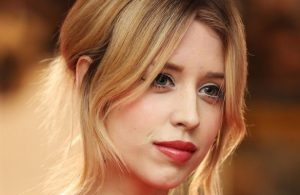 Peaches Geldof Facts:
*Her father founded Live Aid and her mother was a well known TV presenter.
*Her mother Paula Yates died of an accidental drugs overdose in 2000.
*She had two sons with Thomas Cohen.
*She once appeared on the MTV reality show Disappear Here.