Peyton Manning is a former American football quarterback who played in the National Football League (NFL) for 18 seasons. He was drafted by the Indianapolis Colts in the 1998 NFL Draft. He played college football for the University of Tennessee. He was selected NFL MVP for the fifth time in his career after the 2013 season, during which he set a single season NFL record with 55 passing touchdowns. He was born in New Orleans, Louisiana as Peyton Williams Manning. He is the son of former NFL quarterback Archie Manning, and the older brother of New York Giants QB Eli Manning and Cooper Manning. He has been married to Ashley Thompson since March 2001. They have two children: son, Marshall and daughter, Mosley. 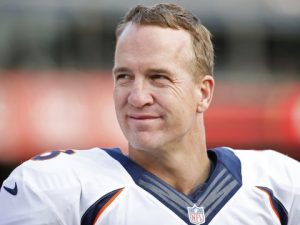 Books: Manning, Manning: A Father, His Sons and a Football Legacy

Peyton Manning Facts:
*He is the son of former NFL quarterback Archie Manning, and brother of New York Giants QB Eli Manning and Cooper Manning.
*As a child, he was called “Peytie Pie” by his mother.
*He helped the Broncos win Super Bowl 50 in 2016.
*The Indianapolis Colts picked him as the first overall pick at the 1998 NFL draft.
*He holds the distinction for completing at least 4,000 passing yards for most number of seasons (14).
*For his performances in 2012 season with Denver Broncos, he won the 2012 NFL Comeback Player of the Year.