Pink is an American singer-songwriter and actress whose second studio album, Missundaztood (2001), was successful worldwide and made her a worldwide known singer. She is the recipient of various accolades including; three Grammy Awards, two Brit Awards, a Daytime Emmy Award and seven MTV Video Music Awards, including the Michael Jackson Video Vanguard Award. Pink’s notable hit songs include “There You Go,” “Lady Marmalade,” “Who Knew,” “Most Girls,” “So What,” “Sober,” “Stupid Girls,” “Just Like a Pill,” “Trouble,” “Don’t Let Me Get Me,” “Get the Party Started,” “Raise Your Glass” and “What About Us.” 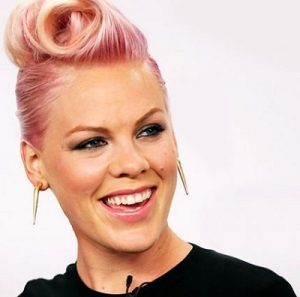 Pink Facts:
*She was born on September 8, 1979 in Doylestown, Pennsylvania, USA.
*She is the daughter of Judith and Jim Moore.
*She is of English, German, Irish and Scottish descent on her father’s side, and of Jewish descent on her mother’s side.
*Her father was a huge Billy Joel fan when she was growing up.
*Her parents divorced when she was three years old.
*She trained as a competitive gymnast between the ages 4 and 12.
*Her debut single, “There You Go” (2000), became her first top-ten hit on the Billboard Hot 100 chart.
*She has released nine albums, Can’t Take Me Home, Missundaztood, Try This, I’m Not Dead, Funhouse, Greatest Hits… So Far!!!, The Truth About Love, Beautiful Trauma, and Hurts 2B Human.
*She has sold over 90 million records worldwide, making her one of the world’s best-selling music artists.
*She was a member of the girl group Choice
*Visit her official website: www.pinkspage.com
*Follow her on Twitter, YouTube, SoundCloud, Facebook and Instagram.