Pippa Middleton is an English socialite, author and columnist, best known as the younger sister of the catherine, Duchess of Cambridge, GCVO, popularly known as Kate Middleton. She became much publicized during the 2011 Royal Wedding. She has worked part-time for her parents’ company Party Pieces, editing the web magazine Party Times, and has contributed articles to The Spectator magazine since 2012. Her book, titled Celebrate, was published in the autumn of 2012. Born Philippa Charlotte Middleton on September 6, 1983 in Reading, Berkshire, England, she is the daughter of Carole and Michael Middleton, and younger sister of Kate Middleton, the Duchess of Cambridge. They also have a younger brother named James. She married hedge fund manager James Matthews in May 2017. They have a son together. 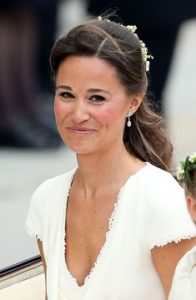 Pippa Middleton Facts:
*She was born on September 6, 1983 in Reading, Berkshire, England, UK.
*She is the younger sister of Catherine Elizabeth Middleton, Duchess of Cambridge.
*She became the sole director and shareholder of PXM Enterprises Limited in 2013.
*From 2008 to November 2011, she dated Alex Loudon.