PJ Harvey is a British musician, best known as a vocalist and guitarist. She plays a number of instruments such as piano, organ, bass, saxophone, harmonica, and the autoharp. Her songs include Down by the Water, Henry Lee, and When Under Ether. She appeared in the 1998 film The Book of Life and a short movie called A Bunny Girl’s Tale. Born Polly Jean Harvey on October 9, 1969 in Bridport, United Kingdom, to parents Ray and Eva Harvey, she grew up on a farm in Corscombe, Dorset. She has one older brother named Saul. Harvey attended school in nearby Beaminster, where she received guitar lessons from folk singer-songwriter Steve Knightley. Following her high school graduation, she attended Yeovil College and attended a visual arts foundation course. She started her career in 1988, joining local band Automatic Dlamini as a vocalist, guitarist and saxophone player. 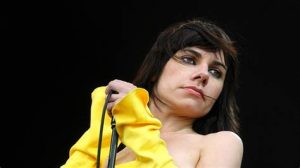 PJ Harvey Facts:
*She was born on October 9, 1969 in Bridport, United Kingdom.
*While growing up, she learned to play a number of instruments such as guitar, saxophone, and violin.
*She has a degree in sculpture and had her work exhibited in several galleries in the UK.
*She was named #1 female rock star in history in a readers poll in British rock magazine Q in 2001.
*She was awarded the MBE in the 2013 Queen’s Birthday Honours List for her services to music.
*She ranked #55 on VH1’s 100 Greatest Women of Rock N Roll.
*She is good friends with Don Van Vliet.
*Her favourite song is “Tainted Love” by Soft Cell.
*She is a fan of the bands Pixies and Sonic Youth.
*Visit her official website: www.pjharvey.net
*Follow her on Twitter, YouTube, SoundCloud, Facebook and Instagram.