Poppy Montgomery is an Australian-American actress. She is best known for her portrayal of FBI agent Samantha Spade on CBS’s Without a Trace, and for her role as Detective Carrie Wells on CBS/A&E’s Unforgettable. In 2019, Poppy played Cat Chambers in the French-American crime drama television series, Reef Break. Her movie credits include The Other Sister, 50 Ways to Leave Your Lover, and Dead Man on Campus. Born Poppy Petal Emma Elizabeth Deveraux Donahue on June 15, 1972 in Sydney, New South Wales, Australia, to parents Nicola and Phil Donahue, her siblings are Rosie, Daisy, Lily, Marigold, and Jethro. Poppy emigrated from Australia to the United States when she was eighteen. She has been married to Shawn Sanford since February 19, 2014. They have two children. She was previously in a relationship with Adam Kaufman from 2005 to 2011. They have one son together. 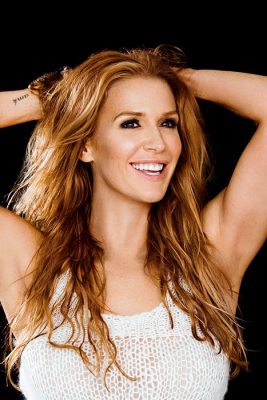 Poppy Montgomery Education:
She dropped out of school at age fifteen to pursue her acting career.

Poppy Montgomery Facts:
*She was born on June 15, 1972 in Sydney, New South Wales, Australia.
*She chose her mother’s maiden name, Montgomery, as her stage name.
*She played Special agent Sam Spade on Without a Trace from 2002 to 2009.
*She was named #45 on the Maxim magazine Hot 100 of 2005 list.
*She starred as Detective Carrie Wells on the police drama Unforgettable from 2011 to 2016.
*She enjoys board games, horseback riding, traveling, photography, snowboarding and yoga.
*She has dual citizenship of Australian and American.
*Follow her on Twitter, Facebook and Instagram.