Portia de Rossi is an American-Australian actress, model and philanthropist. She is best known for television roles as Nelle Porter on Ally McBeal, Lindsay Bluth Fünke on Arrested Development and Elizabeth North on the American political thriller series Scandal. For her work in Ally McBeal, she won a Screen Actors Guild Award. Her other television credits include Too Something, Nick Freno: Licensed Teacher, Nip/Tuck and Better Off Ted. She is also known for her roles in the films Who Is Cletis Tout?, I Witness, The Night We Called It a Day, Cursed and Now Add Honey. Born Amanda Lee Rogers on January 31, 1973 in Horsham, Australia to Margaret and Barry Rogers, her father, Barry, died when she was nine years old. She has an older brother named Michael. She was raised in Grovedale, Victoria, and modelled for print and TV commercials as a child. She was educated at Melbourne Girls Grammar School and the University of Melbourne, where she studied law. Her first role as an actress was in the 1994 film Sirens. She married talk show host and comedian Ellen DeGeneres in 2008. She was previously married to Mel Metcalfe from 1996 until 1999. 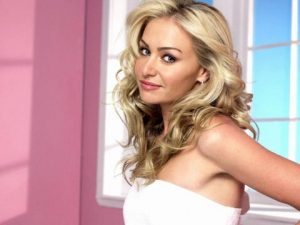 Books: Unbearable Lightness: A Story of Loss and Gain, Vegan Cooking for Carnivores

Portia de Rossi Facts:
*She was born on 31st January 1973 in Horsham, Australia.
*Her father died when she was just nine years old.
*She changed her name from ‘Amanda Lee Rogers’ to ‘Portia de Rossi’ in 1988.
*She began her career in 1994 professionally.
*She has dual citizenship of Australian and American.
*She is an animal rights activist.
*She is a horse lover.
*She is openly lesbian.
*She was named one of 100 Most Beautiful in a People special edition in May 2007.
*She ranked #69 in Stuff Magazine’s 100 Sexiest Women, #31 in Femme Fatales’ Sexiest Women of 2003 list, and #24 in Maxim’s 100 Sexiest Women List in 2004.
*Follow her on Twitter and Instagram.