Lisa Kudrow is an American actress. She is most famous for her portrayal of Phoebe Buffay on the long-running television sitcom Friends, for which she received a Screen Actors Guild Award and a Satellite Award for Best Actress. She is also known for television roles as Ursula on Mad About You, Fiona Wallice on Web Therapy and Valerie Cherish on The Comeback. Kudrow has also appeared in such films as The Opposite of Sex, Analyze This, Wonderland, P.S. I Love You, Bandslam, The Girl on the Train and The Boss Baby. Born Lisa Valerie Kudrow on July 30, 1963 in Encino, Los Angeles, California, to Nedra Stern and Lee N. Kudrow, she grew up in a middle-class Jewish family and had a Bat Mitzvah ceremony. She has two older siblings, a sister named Helene Marla, and a brother, Santa Monica neurologist David B. Kudrow. Following her high school graduation, she earned her Bachelor of Arts degree in Biology from Vassar College. She has been married to Michel Stern since 1995. They have a son, Julian Murray Stern. 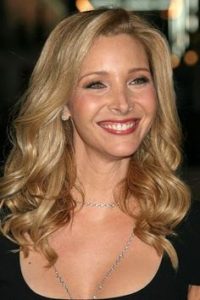 Lisa Kudrow Facts:
*She was born on July 30, 1963 in Los Angeles, California.
*Before becoming an actress, she studied and worked with her father, scientifically researching headaches.
*She began her professional career in 1989.
*At 16, she underwent rhinoplasty that reduced size of her nose.
*She is a vegetarian.
*People Magazine named her one of the top 50 Most Beautiful People in the World in 1997.
*She was the supporter WGA strike, which started in 2007 and ended in 2008.
*She is a big fan of Diane Keaton.
*She is fluent in French.
*Follow her on Twitter, Facebook and Instagram.