Princess Iman bint Abdullah is the 1st daughter and 2nd child of King Abdullah II and Queen Rania of Jordan. She is a member of the Hashemite family, and is gradually emerging as one of the most captivating young princesses on the royal circuit. She attended and graduated from International Academy Amman on June 4, 2014. 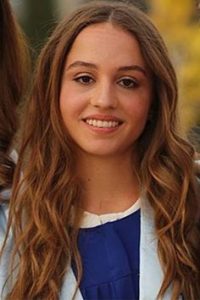 Princess Iman bint Abdullah Facts:
*She is the 42nd-generation descendant of Muhammad.
*She is a keen athlete.
*While in IAA, she was awarded as the top female athlete in her class.