Priyanka Chopra is an Indian actress and the winner of the Miss World 2000 pageant. One of Bollywood’s highest paid actresses, Chopra is the recipient of various accolades including; a National Film Award, five Filmfare Awards, eight Producers Guild Film Awards, eight Screen Awards, six IIFA Awards, two People’s Choice Awards, and was honoured with the Padma Shri by the Government of India in 2016. Her notable film appearances include: Andaaz, Mujhse Shaadi Karogi, Aitraaz, Kaminey, 7 Khoon Maaf, Barfi!, Kaminey, Fashion, Mary Kom, Bajirao Mastani, Krrish and Don. As a singer, Chopra has released three singles. Born on July 18, 1982 in Jamshedpur, Jharkhand, Bihar, India, to parents Ashok and Madhu Chopra, both physicians in the Indian Army, she has a younger brother, Siddharth Chopra. In December 2018, she married American singer-songwriter and actor Nick Jonas. 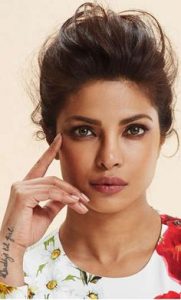 Priyanka Chopra Facts:
*She was born on July 18, 1982 in Jamshedpur, Jharkhand, Bihar, India.
*She won the Miss World title in 2000.
*She won the Miss World pageant in 2000.
*She made her Bollywood film debut with a supporting role in the 2003 spy thriller The Hero.
*Time named her one of the 100 most influential people in the world in 2016.
*Forbes listed her among the World’s 100 Most Powerful Women in 2017 and 2018.
*She is the first South Asian actress to win a People’s Choice Award.
*She is a UNICEF goodwill ambassador.
*She is a big fan of Sarah Michelle Gellar.
*She is the founder of the production company Purple Pebble Pictures.
*She has sports a tattoo on her right wrist that reads “Daddy’s lil girl” in her late father’s handwriting.
*Visit her official website: www.iampriyankachopra.com
*Follow her on Twitter, YouTube, Facebook and Instagram.