Pakistani model and social media star who was known for her videos on social networks discussing her daily routine and various controversial issues. She first gained attention when she auditioned for Pakistan Idol in 2013. She was born Fouzia Azeem on 1 March 1990 in Dera Ghazi Khan, Punjab, into a Muslim family. Her parents are Muhammad Azeem and Anwar Bibi. She had six brothers and two sisters. She married Aashiq Hussain in 2008, and the couple had a son before getting divorced in 2010. She was killed on July 16, 2016, by her brother Waseem Azeem who believed her way of life was bringing dishonor to their family. 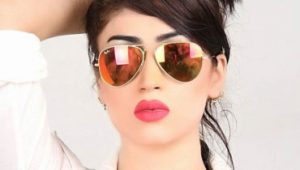 Qandeel Baloch Facts:
*A beautiful and glamorous model from Pakistan.
*In 2013, she auditioned for Pakistan Idol.
*She had promised to strip dance if Pakistan defeated India in the T20 World Cup 2016.
*Before fame, she used to work as a bus hostess.
*She was fluent in Hindi, Punjabi, Pashto, Hindko, Pothwari, English and Balochi.