Queen consort of Jordan who is known for her outspokenness, advocacy work in education, public health, women’s rights, community empowerment, and youth. Born Rania Al-Yassin in Kuwait City, Kuwait, she is the daughter of Faisal Sedki Al Yassin, a physician from Tulkarm and Ilham Yassin. She is of Palestinian heritage. On June 10, 1993, she married Abdullah II King Of Jordan, to whom she first met at a dinner party in 1993. She has four children: two daughters and two sons. 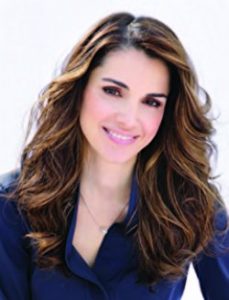 Queen Rania of Jordan Facts:
*She was born to Palestinian parents.
*She speaks English, Arabic and French fluently.
*She used to work for Citibank and Apple Inc after graduating from American University.
*Hapers & Queens magazine ranked her No. 3 in the “100 most beautiful women in the world”.
*One of Forbes magazine’s “100 most powerful women in the world” (2007) (#82).
*Follow her on Twitter, YouTube, Facebook and Instagram.