Rani Mukerji is an Indian actress who appears in Bollywood films. She rose to prominence by portraying the role of Tina Malhotra in Karan Johar’s 1998 film Kuch Kuch Hota Hai, for which she received Filmfare Award for Best Supporting Actress nomination. Rani made her acting debut with Raja Ki Aayegi Baraat in 1997. With numerous awards to her credit, including seven Filmfare Awards, Rani Mukerji is one of the top names in Bollywood. Her other notable film credits include Har Dil Jo Pyar Karega, Chalte Chalte, Yuva, Hum Tum, Veer-Zaara, Black, Bunty Aur Babli, Kabhi Alvida Naa Kehna, Laaga Chunari Mein Daag, and the 2003 film No One Killed Jessica. Rani was born on March 21, 1978 in Calcutta, West Bengal, the daughter of director Ram Mukherjee and Krishna Mukherjee. Her older brother, Raj Mukherjee is a film producer and director. She has been married to Aditya Chopra since 2014. Together they have one daughter, Adira Chopra. 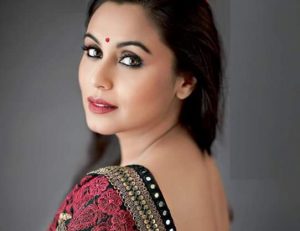 Rani Mukerji Facts:
*She is the daughter of director Ram Mukherjee and sister of producer and director Raj Mukherjee.
*She is cousin of actress Kajol, Mohnish Bahl, Sharbani Mukherji, and Tanishaa Mukerji. Niece of Joy Mukherjee, Deb Mukherjee and Debashree Roy.
*The only actress in Filmfare history to have won both Best Actress and Best Supporting Actress in the same year (2005).
*She was named # 36 by UK magazine ‘Eastern Eye’ as one of “Asia’s Sexiest Women” (Sept/2006).