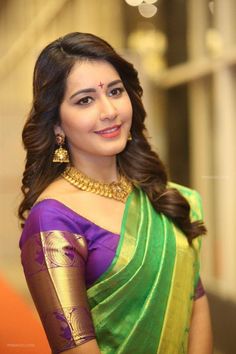 Born on November 30, 1990 in New Delhi, India, to parents Sarita and Raj K. Khanna, she has an older brother named Raunaq. Raashi completed her schooling at St. Mark’s Senior Secondary Public School, Delhi and completed her graduation in B.A. English (Hons.) at Lady Shri Ram College, Delhi. She made her Tamil debut in the 2017 film Imaikkaa Nodigal.

Rashi Khanna Facts:
*She was born on November 30, 1990 in New Delhi, India.
*She earned a B.A. in English from the Lady Shri Ram College for Women.
*She made her debut in a supporting role with the 2013 Hindi film Madras Cafe, directed by Shoojit Sircar.
*She made her digital debut with an untitled web series directed by Raj Nidimoru and Krishna D.K. of The Family Man fame, alongside Shahid Kapoor and Vijay Sethupathi.
*Follow her on Twitter and Instagram.