Rashmi Gautam is an Indian actress, active primarily in Telugu films. And also appeared in Hindi, Kannada and Tamil films. As a television presenter, she is best known for hosting the Telugu television comedy show Extra Jabardasth. Her notable film credits include Vyuham, Ganesh Just Ganesh, Well Done Abba, Kandaen, Prasthanam and Guntur Talkies. For her role in 2012 Kannada film Guru, she received a SIIMA Award nomination for Best Female Debutant Actress. Born on April 7, 1988, in Visakhapatnam, Andhra Pradesh, Rashmi moved to Hyderabad to pursue a career in film industry. 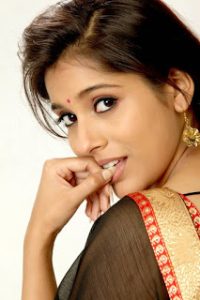 Rashmi Gautam Facts:
*She was born in Visakhapatnam, Andhra Pradesh.
*She was discovered by actress Sangeetha at a reality dance show.
*She made her film debut with a role as Shalu in the 2002 Telugu film Holi.
*Follow her on Twitter, Facebook and Instagram.