Richard Jefferson is an American professional basketball player who is currently a free agent. He played college basketball for the University of Arizona. Jefferson was drafted in the first round of the 2001 NBA draft with the 13th overall pick, and was named to the NBA All-Rookie Second Team in his first season with the New Jersey Nets. He won a bronze medal with the U.S. national team at the 2004 Summer Olympics and won an NBA championship with the Cleveland Cavaliers in 2016. Born Richard Allen Jefferson on June 21, 1980 in Los Angeles, California, to Christian missionaries parents Meekness LeCato and Richard Jefferson, Sr., he grew up in Phoenix, Arizona. He attended Moon Valley High School in Phoenix, AZ where he was a member of the varsity team which won the 4A State trophy in 1998. He is married to Teresa Lourenco. He was previously in a relationship with American model Kesha Nichols from 2006 to 2009. 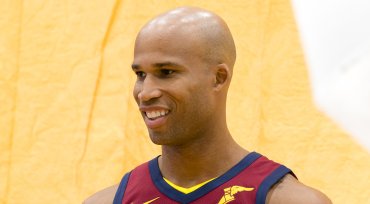 Richard Jefferson Facts:
*He was born on June 21, 1980 in Los Angeles, California, USA.
*His parents were Christian missionaries.
*He was a member of the United States national team that competed at the 2004 Summer Olympics.
*He was part of the Pac-12 Basketball Hall of Honor in 2012.
*In 2015, he began playing for the Cleveland Cavaliers.
*In 2016, he won an NBA championship with the Cleveland Cavaliers.
*In October 2018, he announced his retirement from professional basketball but in July 2019, he announced he was ending his retirement.
*Follow him on Twitter and Instagram.