A multi-talented performer, Ricky Gervais is most famous for his portrayal of David Brent in the television series ‘The Office’, also co-creator, writer, director, and as Andy Millman in ‘Extras’, also co-creator, writer, director, executive producer. He has also starred in the films Special Correspondents, David Brent: Life on the Road and Night at the Museum: Secret of the Tomb. He was the controversial host of the Golden Globe Awards in 2010, 2011 and 2012. With numerous awards to his credit, Ricky Gervais is one of the top names in comedy. His accolades include seven BAFTA Awards, five British Comedy Awards, three Golden Globe Awards, two Emmy Awards. The youngest of four children, Ricky was born on June 25, 1961 in Reading, Berkshire, England, UK as Ricky Dene Gervais. He is the son of Eva Sophia M Gervais and Lawrence Raymond ‘Jerry’ Gervais, and brother to Marsha, Larry and Bob. He has been in a long term relationship with Jane Fallon. 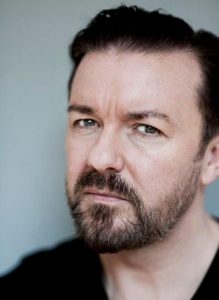 Ricky Gervais Facts:
*He is the youngest of four children.
*Woody Allen is his favorite all-time comedian.
*He used to work as a DJ on London’s XFM radio station and managed bands before going into TV comedy.
*He cites Mike Leigh as a big influence.
*He is a supporter of animal rights and has spoken out against fox hunting and bullfighting.
*Visit his official website: www.rickygervais.com
*Follow him on Twitter, YouTube, Google+, Facebook and Instagram.