Canadian actress and model, Cobie Smulders is most famous for her portrayal of Robin Scherbatsky in the CBS television series How I Met Your Mother. She can also be recognized for her roles as Maria Hill in the Marvel Cinematic Universe. She played Allison in the 2017 film Literally, Right Before Aaron. Cobie was born Jacoba Francisca Maria Smulders on April 3, 1982, in Vancouver, British Columbia, to a Dutch father and an English mother. After several years of dating, Cobie and American actor and comedian Taran Killam became engaged in January 2009. They married on September 8, 2012, in Solvang, California. Together they have two daughters. 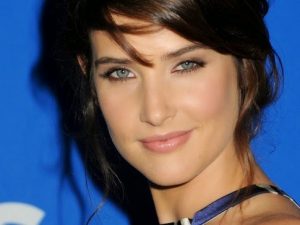 Cobie Smulders Facts:
*Her father is Dutch and her mother is English.
*She was nicknamed ‘Cobie’ by her great-aunt Jacoba.
*She is fluent in French.
*She was ranked no. 65 in Maxim’s Hot 100 list of Women in 2012.
*She joined tennis, swimming, and soccer as a teenager.
*Follow her on Twitter, Facebook and Instagram.