Rinko Kikuchi is a Japanese actress. She is best known for her role as the deaf and mute teenage girl Chieko Wataya in the 2006 film Babel, for which she was nominated for the Academy Award for Best Supporting Actress. She was also nominated for an Asian Film Award for Best Actress, for her work in the 2010 film Norwegian Wood. Rinko’s other notable works include Pacific Rim (2013) and Kumiko, the Treasure Hunter (2014). Born Yuriko Kikuchi on January 6, 1981 in Hadano, Japan, she is the youngest of three siblings. She was discovered at the age of 15 by a talent agent on the street. Rinko made her stage debut in the play, “Suigin”, directed by Hidehisa Tachibana. She has been married to actor Shota Sometani since December 31, 2014. Together they have one child. 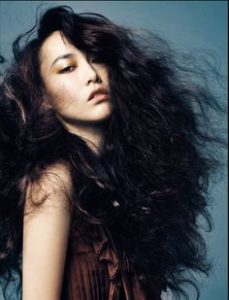 Rinko Kikuchi Facts:
*She was born on January 6, 1981 in Hadano, Japan.
*She started acting as a teenager.
*The first Japanese actress to be nominated for an Academy Award in fifty years.
*Variety Magazine named her one of the Ten Actors to Watch in 2007.
*She is also an accomplished motorcyclist and horseback rider.
*Visit her official website: www.rinkokikuchi.com
*Follow her on Instagram.