Rita Wilson is an American actress, producer, and singer. She is known for her roles in the films Now and Then, Sleepless in Seattle, That Thing You Do, Jingle All the Way, The Story of Us and Runaway Bride. She performed the role of Roxie Hart in the musical Chicago. Her well-known television credits include The Good Wife and Girls. Born Margarita Ibrahimoff on October 26, 1956 in Los Angeles, California, USA to Dorothy and Allan Wilson, she was raised in the Greek Orthodox faith. She attended Hollywood High School in California and later studied at the London Academy of Music and Dramatic Art (LAMDA) in England. She made her television debut on an episode of The Brady Bunch. In April 1988, she married actor Tom Hanks. They have two sons, Chester and Truman. 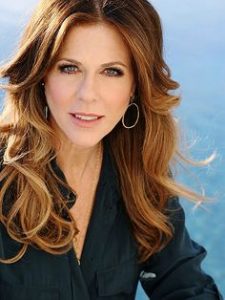