RM is a South Korean rapper, songwriter, and record producer. He is best known as a member of the South Korean pop idol group Bangtan Boys (BTS). BTS’s second Korean studio album Wings became BTS’ first album to sell one million copies in South Korea. The other members of the band are Jin, Suga, J-Hope, Jungkook, V, and Jimin. RM released his debut solo mixtape, RM, in 2015, followed by his second mixtape, Mono in October 2018. He has recorded with artists such as Krizz Kaliko, MFBTY, Fall Out Boy, Wale, Warren G, Gaeko, Primary, and Lil Nas X. Born Kim Nam-joon on September 12, 1994 in Dongjak-gu, Seoul, South Korea, he grew up in Ilsan-gu. He has one younger sister named Kim Geong-min. Before joining Bangtan Boys, he had a solo underground career under the stage name of Runch Randa. 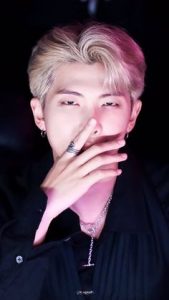 RM Facts:
*He was born on September 12, 1994 in Dongjak-gu, Seoul, South Korea.
*He began his solo rap career under the stage name of Runch Randa.
*He is the leader and main rapper of the band BTS.
*He has an IQ of 148.
*He taught himself fluent English from watching the TV show Friends (1994) after his mother bought him the boxed DVD set.
*RM’s recording studio/office is named Rkive.
*BTS Official Homepage http://bts.ibighit.com
*Follow BTS on Twitter, SoundCloud, YouTube, Facebook, Twitter and Instagram.