Robbie Merrill is an American musician, best known as a founding member and bassist of the Boston-based rock band Godsmack and Another Animal. He was featured in the Behind the Player interactive music video. 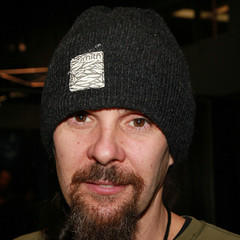 Born on June 13, 1963 in Lawrence, Massachusetts, Merrill started playing bass at age fourteen, having traded in his train set for the instrument. He is married to Heather. They have three daughters; Nianna, Nikiah, and Neven.

Music Groups: Godsmack (Since 1995), Another Animal

Robbie Merrill Facts:
*He was born on June 13, 1963 in Lawrence, Massachusetts, USA.
*He worked as a self-employed carpenter, a trade likewise pursued by Tony Rombola before joining Godsmack.
*One of the founders of the heavy metal group Godsmack.
*He writes righthanded due to a birth defect that renders him unable to move the middle finger of his left hand.
*Visit his band’s official website: www.godsmack.com
*Follow him on Twitter, Facebook and Instagram.