Robin Williams was an American actor and stand-up comedian who rose to prominence with his role as Mork in Mork & Mindy. Best remembered by the public for his roles in the films Good Will Hunting and Dead Poets Society. He also played lead roles in the films Hook, Patch Adams, Mrs. Doubtfire, Jumanji and Good Morning, Vietnam. Born Robin McLaurim Williams on July 21, 1951 in Chicago, Illinois, his father, Robert Fitzgerald Williams, was a Ford Motor Company executive from Indiana and his mother, Laurie McLaurin, was a former model from Mississippi. He was belongs to English, German, French, Welsh, Irish, and Scottish descent. His family moved to Michigan when he was a young kid and there he joined the Detroit Country Day School. 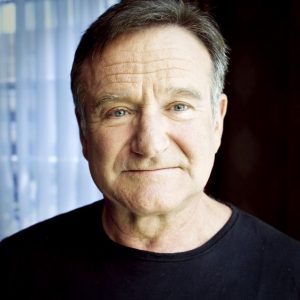 Robin Williams Facts:
*His father worked as a senior executive at Ford Motor Company while his mother had been a former model.
*At age 16, he moved to San Francisco, CA.
*He played soccer while in Claremont Men’s College.
*He was voted funniest man alive by Entertainment Weekly 1997.
*On August 11, 2014, he was found dead in his California home at age 63.