Zsa Zsa Gabor was a Hungarian-American actress and socialite who crowned Miss Hungary 1936 beauty pageant. She was known for her glamorous, sometimes scandalous, personal life as she was for her television and film appearances. She is also known as the sister of actress Eva Gabor. Her notable works include A Nightmare on Elm Street 3: Dream Warriors, The Naked Gun 2 1/2: The Smell of Fear, Moulin Rouge, Lovely to Look At and We’re Not Married!. In 1960, she released an autobiography which was co-written by Gerold Frank. Born Sári Gábor on February 6, 1917 in Budapest, Hungary, to Vilmos and Jolie Gabor, her parents were both of Jewish ancestry. She is the sister of Magda Gabor and Eva Gabor. She was married nine times. 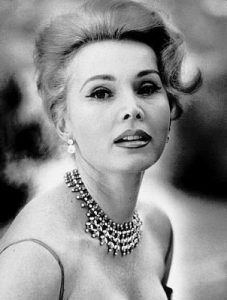 Zsa Zsa Gabor Facts:
*The middle of three daughters.
*She was crowned Miss Hungary in 1936.
*She and her elder sister Magda Gabor were each married to George Sanders.