Roman Reigns is an American professional wrestler who debuted on the WWE main roster in November 2012 alongside Dean Ambrose and Seth Rollins as The Shield and was well-received by fans and critics. He is a prolific champion in WWE, having held the WWE Championship three times and the WWE Universal Championship twice. He is also a one-time WWE United States Champion, a one-time WWE Intercontinental Champion, a one-time WWE Tag Team Champion (with Rollins), the 2014 Superstar of the Year, and the 2015 Royal Rumble winner. Reigns tied the WWE record for most eliminations in a Survivor Series match with four in the 2013 event and also previously held the record for most eliminations in a Royal Rumble match with 12 in the 2014 event. Also a former Canadian footballer, Reigns played football at the Georgia Institute of Technology and was named first-team All-ACC his senior year before he started his professional wrestling career. He went drafted in the 2007 NFL Draft but ended up being signed by the Minnesota Vikings. In 2019, Reigns appeared in the action film Hobbs & Shaw. 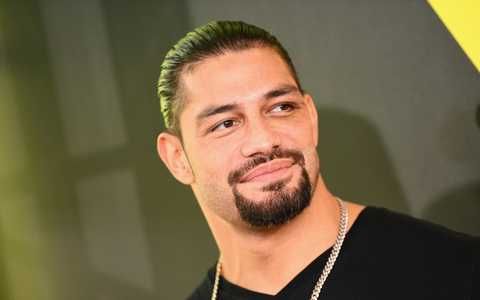 Born Leati Joseph Anoa’i on May 25, 1985 in Pensacola, Florida, to parents Patricia and Sika Anoa’i, he is of Samoan and Italian descent. In December 2014, he married Galina Becker. They have five children.

Roman Reigns Facts:
*He was born on May 25, 1985 in Pensacola, Florida, USA.
*One of the members of the Anoa’i wrestling family, which also includes his father Sika Anoaʻi, brother Rosey, and cousins Yokozuna, Umaga, Rikishi, and The Tonga Kid.
*He debuted in 2012 as a member of The Shield.
*He was drafted to the Raw brand in 2016.
*He holds the records for most Survivor Series and Royal Rumble eliminations.
*He was ranked #1 in Pro Wrestling Illustrated’s annual PWI 500 list of the top 500 singles wrestlers in 2016.
*He is currently signed with World Wresting Entertainment (WWE).
*He considers Bret Hart his wrestling idol.
*Follow him on Twitter, Facebook and Instagram.