Ronda Rousey, born February 1, 1987, is an American mixed martial artist, judoka and actress who was the first American woman to won an Olympic medal (bronze) in judo. She is the former UFC Women’s Bantamweight Champion. Rowdy was born Ronda Jean Rousey in Riverside County, California to parents Ron Rousey and AnnMaria DeMars, a Judo artist. She has two older sisters named Maria Burns-Ortiz and Jennifer Rousey, and one younger sister named Julia DeMars. 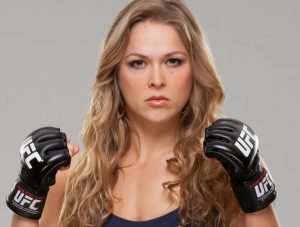 Ronda Rousey Education:
Rousey attended the high school in Jamestown, North Dakota but dropped out before graduation.
She cleared her GED tests which certify her high school-level academic skills.

Ronda Rousey Facts:
*She has taught martial arts at Dynamic MMA in Venice, California, USA in the past.
*Her mom is a seventh-degree black belt in judo, and the first American to ever win a world championship in judo, in 1984.
*She was given the nickname “The Arm Collector” because she has won all her mixed martial arts bouts by arm bar.
*She appeared on the cover of ESPN The Magazine’s 2012 Body Issue.
*At age 17, She became youngest judoka (judo player) to compete at the Olympics, during the 2004 games in Athens, Greece.
*Follow Rowdy on Twitter, Facebook and Instagram.