Rosanna Davison is an Irish actress, singer, model, author and beauty queen who crowned Miss World 2003. She is the daughter of singer/musician Chris De Burgh who wrote the song “For Rosanna” for his 1986 album, Into the Light in her honour. Rosanna was signed to Storm Model Management. She became the face of ‘Holiday On Ice’, and has also been involved in two campaigns for Newbridge Silverware and Rally England. In 2009, Rosanna starred alongside Irish actor Richard Wall in Vena, in which she played his girlfriend. In October 2013, she started presenting slots on LFC TV, the dedicated television channel for Liverpool F.C. Born Rosanna Diane Davison on April 17, 1984 in Dublin, Republic of Ireland, to Diane de Burgh and Chris de Burgh, she has two brothers; Hubie and Michael. She did her schooling from Aravon School, in County Wicklow and Rathdown School in Glenageary, County Dublin. She graduated in 2006 from University College Dublin with an arts degree in Sociology and Art History. In 2006, she started dating Wesley Quirke, they became engaged in 2013 and wed on May 16, 2014. 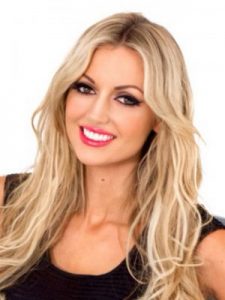 Rosanna Davison Facts:
*She was born on April 17, 1984 in Dublin, Republic of Ireland.
*Her father Chris de Burgh wrote the song “For Rosanna” in her honour.
*Best known as the winner of the Miss World competition in 2003 for Ireland.
*First Irish woman to win the title “Miss World 2003”.
*Bestselling author of the book Eat Yourself Beautiful.
*She appeared on the cover of “Playboy” magazine (Germany) in 2012.
*She placed second in a poll to find Ireland’s most desirable Valentines in February 2012.
*She posed n*de in a PETA ad campaign promoting a vegan diet.
*Visit her official website: www.rosannadavisonnutrition.com
*Follow her on Twitter, Facebook and Instagram.