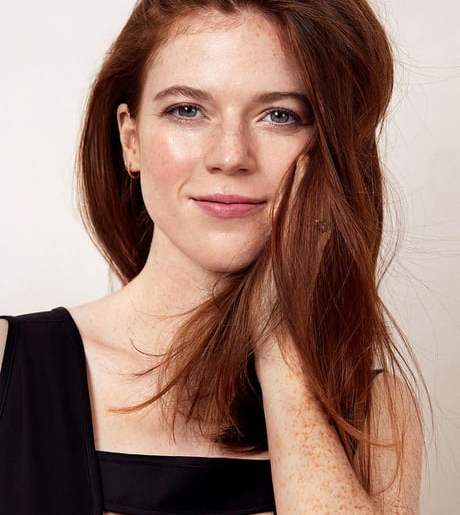 Rose Leslie is a Scottish actress who rose to stardom with roles in Downton Abbey and Game of Thrones. She played Maia Rindell for three seasons of the CBS All Access legal and political drama The Good Fight. She also appeared in the films Now Is Good and The Last Witch Hunter. Leslie won a Scottish BAFTA for her performance in the television film New Town.

Born Rose Eleanor Arbuthnot-Leslie on February 9, 1987 in Aberdeen, United Kingdom, Leslie’s father, Sebastian Arbuthnot-Leslie, is the Chieftain of the Aberdeenshire branch of the Scottish Clan Leslie, and her mother is Candida Mary Sibyl “Candy” Leslie of Clan Fraser of Lovat, whose maternal great-grandfather was Simon Fraser, 13th Lord Lovat and a descendant of King Charles II. She moved to France with her family when she was ten. She attended the London Academy of Music and Dramatic Art and graduated in 2008.

In 2012, Leslie began dating Game of Thrones co-star Kit Harington. In September 2017, they announced they were engaged, and married in June of 2018. In 2021, Leslie gave birth to their first child, a son.

Rose Leslie Facts:
*Born on February 9, 1987 in Aberdeen, United Kingdom, she grew up in Lickleyhead Castle in Aberdeenshire.
*Her ancestry includes Scottish, English, Welsh, Mexican, Irish, French Huguenot, and Basque.
*She played Ygritte in the HBO fantasy series Game of Thrones from 2012 to 2014.
*She is the 5th cousin of actress Olivia Wilde through Scottish nobility.
*She is close friends with Emilia Clarke.