Rosie Huntington-Whiteley is a British model, actress, designer, and businesswoman. She is most famous for her work for lingerie retailer Victoria’s Secret and Burberry. She became a Victoria’s Secret Angel in November 2009. She has appeared on the cover of fashion magazines such as Vogue, GQ, Elle, Harper’s Bazaar among others. As an actress, she made her film debut as Carly Spencer in the sci-fi action film Transformers: Dark of the Moon. She played The Splendid Angharad in the 2015 action film Mad Max: Fury Road. Born Rosie Alice Huntington-Whiteley on April 18, 1987, to Fiona Huntington-Whiteley and Charles Andrew Huntington-Whiteley, she grew on her parent’s country farm in rural England. She has two younger siblings, a sister named Florence, and a brother, Toby. She started modeling when she was 16. She was educated at Milton Abbot Primary School and Tavistock College, Tavistock, Devon, England. She has been in a relationship with actor Jason Statham since 2010, they became engaged in January 2016 and welcomed a son named Jack in 2017. 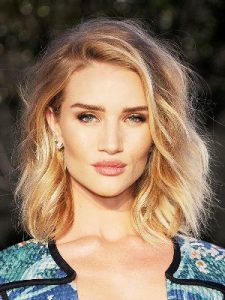 Rosie Huntington-Whiteley Facts:
*She was born on April 18, 1987 in Plymouth, Devon, England.
*She wanted to be an Interior Designer.
*She was voted “Person Most Likely to become a Supermodel” in her school yearbook.
*She has appeared in five Victoria’s Secret Fashion shows from 2006 through 2010.
*She appeared in the music video ‘Number 1’ with Pharrell Williams and Kanye West.
*She was ranked #1 in Maxim magazine’s Hot 100 Women of 2011 list.
*In 2011, FHM ranked her in the top 100 in their list of the sexiest women in the world.
*Follow her on Twitter, Facebook and Instagram.