Ruby Rose is an Australian model, actress, and television presenter who gained recognition as a presenter on MTV Australia, followed by several high-profile modelling gigs, notably as the face of Maybelline New York in Australia. She also co-hosted Australia’s Next Top Model (2009) and The Project on Network Ten (2009–2011). As an actress, Rose is known for her role as Stella in Orange Is the New Black. She has also played prominent roles in the action movies Resident Evil: The Final Chapter, XXX: Return of Xander Cage and John Wick: Chapter 2 and has co-starred in the musical comedy Pitch Perfect 3 and the monster movie The Meg. She was cast as the title character in the first season of the CW television series Batwoman (2019–20). Rose released her debut single “Guilty Pleasure” with Gary Go, in January 2012. Born Ruby Rose Langenheim on March 20, 1986 in Melbourne, Australia, her mother Katia Langenheim was a single parent. She was educated at University High School and Footscray City College. Rose first gained attention after finishing as runner-up in the 2002 Girlfriend Magazine Model Search. She has dated Catherine McNeil, Phoebe Dahl, and Jessica Origliasso. 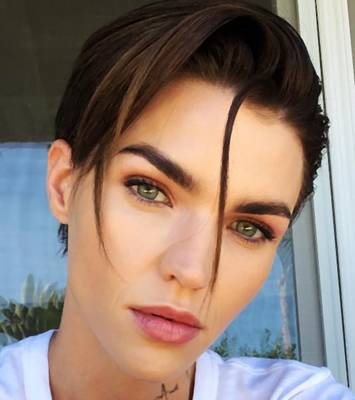 Ruby Rose Facts:
*She was born on March 20, 1986 in Melbourne, Australia.
*She describes her mother as one of her role models
*She is the goddaughter of Indigenous Australian boxer Lionel Rose and the great-granddaughter of Alec Campbell.
*She came out as a lesbian at age 12.
*She launched her fashion line, Milk and Honey Designed by Ruby Rose, in 2010.
*She is an avid supporter of animal rights and has been a member of PETA for years.
*She has been the face of Urban Decay Cosmetics since March 2016.
*She has tattoos covering both of her arms.
*She has acquired 65 tattoos.
*Visit her official website: www.rubyroseofficial.com
*Follow her on Instagram, Facebook and YouTube.