Isabella Cramp is an American child actress and voice artist. She is best known for her portrayal of Abby Weaver on the ABC comedy series The Neighbors. She provides the voice of Shine in the Nick Jr. program, Shimmer and Shine. Cramp’s other notable works include Happy Endings, Colony, Whisker Haven, Vampirina, and the 2015 film Joy. Born Isabella Veneranda-Patricia Cramp on December 18, 2004 in California, her father, Bradley Cramp, is a producer and writer while her mother, Denise Crovetti, is a Broadway and film actress. She has two brothers named Nicholas and Cameron. Cramp started acting at age five playing small roles on television and in commercials. 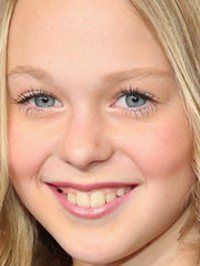 Isabella Cramp Facts:
*She was born on December 18, 2004 in California, USA.
*Her full name is Isabella Veneranda-Patricia Cramp.
*She started her career in 2010.
*She played Abby Weaver in the ABC comedy series The Neighbors in 2012.
*She is also a competitive gymnast and track runner.
*She plays the guitar and enjoys a variety of sports.
*Follow her on Facebook and Instagram.