Samantha Fox is a British pop singer, actress and former glamour model. She is best known for her debut single “Touch Me (I Want Your Body)”, which peaked at number-one in 17 countries. She has released six studio albums and has sold more than thirty million records across the globe. She was a contestant in the 2009 series of I’m a Celebrity…Get Me Out of Here!. Born as Samantha Karen Fox on April 15, 1966 in Mile End, London, to Carole Ann Wilken and John Patrick Fox, she has a younger sister, Vanessa. She had her first modeling job at age sixteen, and was youngest Page 3 girl ever at age 16. 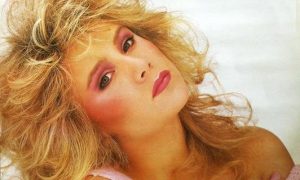 Samantha Fox Facts:
*She began her a career as a model.
*She was ranked #81 on VH1’s 100 Sexiest Artists.
*In 2003, she stated that she is in a lesbian relationship.
*She is a supporter of English club Arsenal Football Club.
*Visit her official website: www.samfox.com
*Follow her on Twitter, Facebook and Instagram.