Actor and producer Samuel L. Jackson Biography, Family, Career, Height, Weight, Age, Measurements will be discussed here. Samuel L. Jackson personal details can be checked here. Widely regarded as one of the most popular actors of his generation, Jackson won a BAFTA Best Supporting Actor Award for his role as Jules Winfield in the 1994 classic Pulp Fiction.

Samuel L. Jackson is an American actor and producer who has appeared in many films, notably Die Hard with a Vengeance, Unbreakable, The Avengers, Shaft, Formula 51, Black Snake Moan, Django Unchained, Snakes on a Plane, Pulp Fiction, Jurassic Park and the Star Wars and Marvel superhero franchises. Other notable film credits include Sphere, The Negotiator, Kingsman: The Secret Service and Jackie Brown.

Born Samuel Leroy Jackson on December 21, 1948 in Washington D.C., to Elizabeth (Montgomery) and Roy Henry Jackson, he was raised by his mother, a factory worker, and his grandparents. His father lived away from the family in Kansas City, Missouri, and later died of alcoholism. Jackson met him only twice during his life. Jackson graduated from Morehouse College in 1972 and began his acting career on stage. 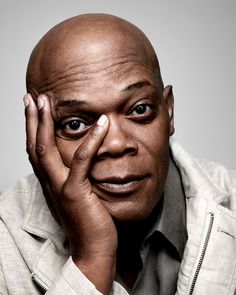 He married actress and producer LaTanya Richardson in 1980, and they currently reside in California. Together they have one daughter, Zoe Jackson.

Samuel L. Jackson Facts:
*He was born on December 21, 1948 in Washington D.C., and was raised in Chattanooga, Tennessee.
*Growing up, his idol was Errol Flynn and dreamed about being a movie swashbuckler someday.
*He majored in marine biology at Morehouse College before switching to architecture.
*He co-founded the acting group, Just Us Theatre, while in college.
*He was named the highest-grossing actor of all time with more than $7.2 billion in wealth. (2011)
*He is an avid golfer.
*He is an avid Liverpool FC supporter.
*He is a fan of the Atlanta Falcons football club.
*He is good friends with British actor Simon Pegg.
*He is friends with Denzel Washington, Magic Johnson, and Alan Alda.
*Follow him on Twitter, Facebook and Instagram.